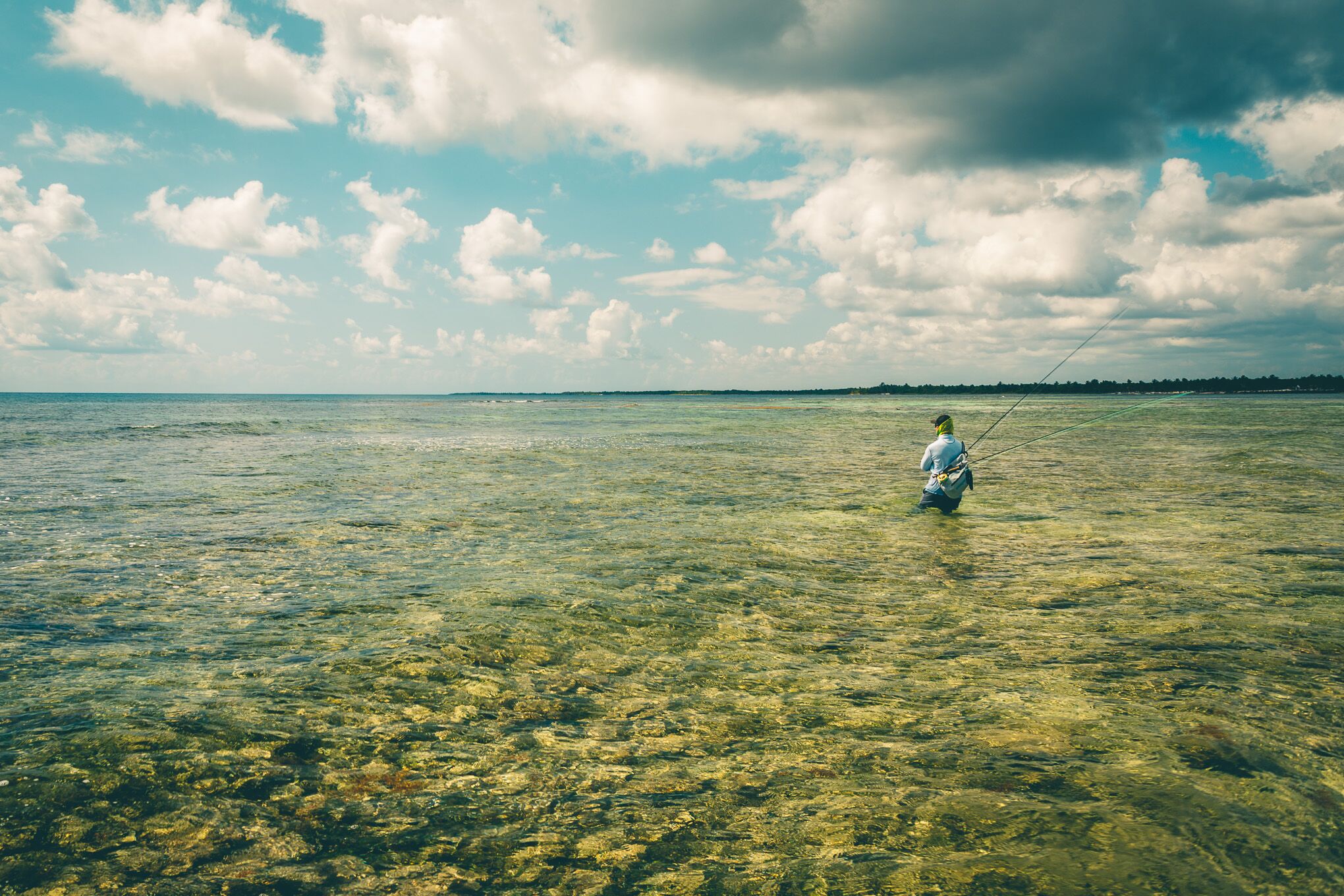 Living in Ellicottville, NY about 45 miles south of Buffalo, winter can be relentless. While most western New Yorkers spend the winter months skiing, I spend a good number of my days scouting for fish along icy streams that are often no wider than three feet across. As a fly fishing guide for Adventure Bound, an Orvis-endorsed shop in Ellicottville, it’s all part of the job!

Fishing is more than my life’s passion. It’s taken me to some amazing places. One of my favorites is the Yucatán peninsula. White sandy beaches and flats make spotting fish easy, and the inland lagoons that connect to the ocean through limestone sinkholes or “cenotes” allow fish to travel in and out of these areas to feed. When we travel to this area, we always bring SUP onthefly inflatable stand up paddleboards. This gives us an advantage over most DIY anglers.

The SUP onthefly boards deflate into a bag that has roller wheels, and backpack straps to hike the boards around if needed. When packed down with a paddle, pump and a repair kit, the package doesn’t exceed 50 pounds, so you can check it like  piece of luggage. It’s the only way to carry a boat on the airplane!

My most recent trip took me to Xcalak, which is in the Yucatan Peninsula of Mexico. I’ve been to this region twice with SUP onthefly while producing some promotional videos. So I decided to go back with my buddy – Mike Ilecki, my roommate – Ryan Lee, and Buffalo Orvis Fishing Manager – Andrew Nisbet to share this amazing destination. SUP onthefly provided three Guide boards fully outfitted with coolers and rod holders.

Xcalak is a Mexican community on the border of Belize and Chetumal Bay about four hours south of Cancun. This region, with epic salt water flats and lagoons, is known for its world class fishery of multiple species.

We stayed at Acocote Eco Inn, run by Rob Mukai on the north side of Xcalak. Aconote is right on the beach with inland lagoons in the backyard. Our SUP onthefly boards provided a vehicle to explore untouched miles of lagoons and parts of the bay where only guides in Pangas can venture.

We spent the first two days fishing in Chetumal Bay and surrounding lagoons where we encountered quite a few tarpon, jacks and barracuda. After getting shut out on the bay we hit the lagoons where I was able to finally hook and land a baby Tarpon with the Tarpon Bunny fly.

On day three, we decided to focus all of our efforts into exploring the lagoons. On a northern channel, we decided to send a drone up to see if we could spot schools of fish swimming around. We didn’t find any pods but we were able to see a few lone tarpon scattered along the mangroves. 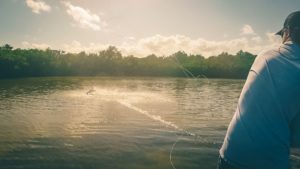 Making our way up the lagoon’s edge, battling wind the entire time, we were finally at the top of the lagoon in the lee of the land. Drew spotted a tarpon laid up along the mangroves. Two casts later this fish absolutely crushed his tarpon bunny, and it was “game on”. He fought the tarpon for a few minutes until another epic jump shook the hook from the fish. It was a bummer, but the excitement and energy that comes from hooking a fish like that is what keeps us awake at night. After the adrenaline slowed, we paddled back to meet up with the other guys.

By this time, it was mid day, low tide, and we headed to an area we named Tarpon Beach because we consistently spotted roaming pods of tarpon. This part of the lagoon was almost always down-wind with a long stretch of sand bordered by lush grasses.

As soon as we hit the beach, Andrew spied a pod coming right at us. As soon as he laid the fly on the lead fish, it ate and gave us an acrobatic show. When Mike and Ryan headed our way they encountered a pod of tarpon that took off from where Andrew hooked his. They anchored up on them and worked them thoroughly but none would seem to take.

Meanwhile, Andrew and I worked our way over to the pod and made a few unsuccessful casts at some single fish. By this time, it was around 4 p.m. and the wind was letting up, providing optimal fishing conditions. Mike and Ryan were working their way to Tarpon Beach, when all a sudden, fish appeared. 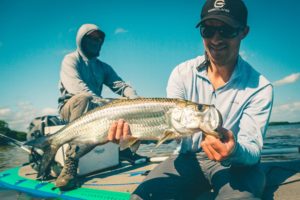 I broke out in a sweat as 15-20 Jack Crevalle started to work their way toward Andrew and I. Right in the exact spot Mike and Ryan were in no more that 3 minutes prior, these Jacks started daisy chaining ( swimming in a tight circle )  right next to us. They bit the tail off my Tarpon bunny on the second cast. I started casting like a madman in a rush of excitement and Drew reminded me to relax and slow down.

He handed me a different rod with a popper on it. The school of Jacks chase it down time and time again, just missing the popper every time. After a few casts with topwater, I was able to quickly change over to a crab pattern. Just like the prior patterns, the pod of fish swarmed the fly like a group of angry bees. One would chase it and turn then another would come over and swing at the fly.

It wasn’t until my fourth fly, which I changed to a shrimp, that I was finally able to go tight on one. This fish immediately sent me right into my backing, as the jack trying to stay with the pod, which was spooked.

Now I’ve hooked a few jacks on my trips to the Yucatan, some oceanside on poppers and some on flats, but I can never seem to bring one to hand. This fish was on fire, doing multiple runs in the shallow lagoon. It finally made its way 20 feet from the board, on its side trying to win this tug of war. Just when I thought I was finally bringing the fish in, the line went slack and the fly popped out of its mouth! I watched the Jack slowly swimming away, most likely having a few choice words about the way I treated him. That brings me to 0 for 4 on Jack Crevalle, but I enjoyed the fight as much as if I were to land the fish. Further inspection of the fly proved it had bent to the side a bit, allowing it to slide right out. What. a. bummer. 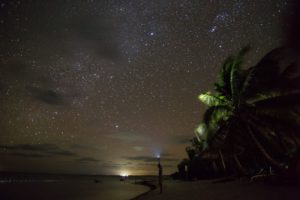 We left Acocote that evening and headed to a lodge in the center of Xcalak, Xcalak Caribe Lodge, for our last fishing night. Following a meal of Mexican cuisine at Toby’s Restaurant, a local who was having a beach side party and invited us to join. That kind of hospitality is typical of the vibe in the Yucatan. Spectacular days on the water, outstanding food, beer and relaxation totally restores your body and soul.

The next morning we decided to head north to fish Mahahual for our last day of the trip. The beach side fishing on the Mezo – American Reef is absolutely fantastic. Permit, Trigger fish, Barracuda and the occasional Tarpon stroll the reef close to shore. Andrew ended up hooking one permit, and we saw quite a few schools of Permit and trigger fish. Calling it quits fairly early, we wanted to get to our final sleeping place in Mahahual to clean the gear and pack before our 3 a.m. departure to the airport.

From ocean side reef fishing to salt flats and inland lagoons, the Yucatan region is a DIY angler’s paradise. Beyond fishing, we savor sweet memories of the delicious authentic cuisine we ate in Xcalak and the small picturesque fishing villages throughout the southern Yucatán. We were at sun up to sun down for four days straight and I can’t think of a way I’d rather spend 100 hours of my life!